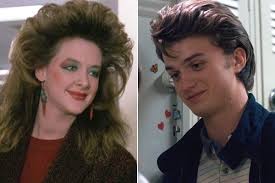 And I’m not just saying that because of the hair. Although, in the pantheon of obnoxious fashion trends, that mall hair is up there. Every time Steve appears on “Stranger Things,” I’m transported to my own personal upside down, high school, specifically the PE locker room, where my nose would burn from the clouds of Aqua Net.

The hair was bad, no doubt, but so were the movies. Yowza.

Now, don’t get me wrong. I loved ’80s movies. At the time. I watched them over and over when they came out on VHS (look it up, young ‘uns). But when the hub and I went through this nostalgic phase of feeling like we needed to show our kids the pivotal films of our youth, we cringed. A lot. That awkward post-viewing moment after “Sixteen Candles” made me feel like a counselor at a school assembly as we addressed the inappropriate scenes in the movie. “So…. racism… date rape….”

You don’t see stuff like that in PG movies today, the family newspaper, definitely, as the latest scandal involving a skeevy politician unfolds. How was it even possible that “Sixteen Candles” was PG? Did R ratings not exist back then? I can’t remember. Plus, I wasn’t allowed to watch them.

Now, my kids have yet to see “Goonies.” I was apparently the only teen who missed seeing that flick when it came out in 1985, and when I finally did see it — decades later as a 35-year-old parent — it absolutely freaked me out. Am I the only person who thought this was disturbing and scary?

I was also horribly embarrassed after a viewing of “Overboard,” which showcases kidnapping and holding someone prisoner under false pretenses. Gross. I think “E.T.” is the only movie from back then that didn’t make me feel embarrassed to have enjoyed it. Oh, and “Stand By Me.”

So now we’re watching “Stranger Things” as a family and that, to me, seems like a better, sanitized version of the ’80s — all the sweetness but without questionable sex scenes and racially insensitive creepiness. There’s still the horrible hair and absentee parents. Note to Dustin’s mom: You were very, very bothered about the cat missing, but Dustin’s been gone and it’s, like, 10 p.m. and you’re cool with that? Don’t even get me started on Ted. Um also, why did they all stop going to school?

The moral of the story: The ’80s were weird, but that decade certainly provides plenty of fodder for important discussions on social issues. And that, I guess, is one to grow on.