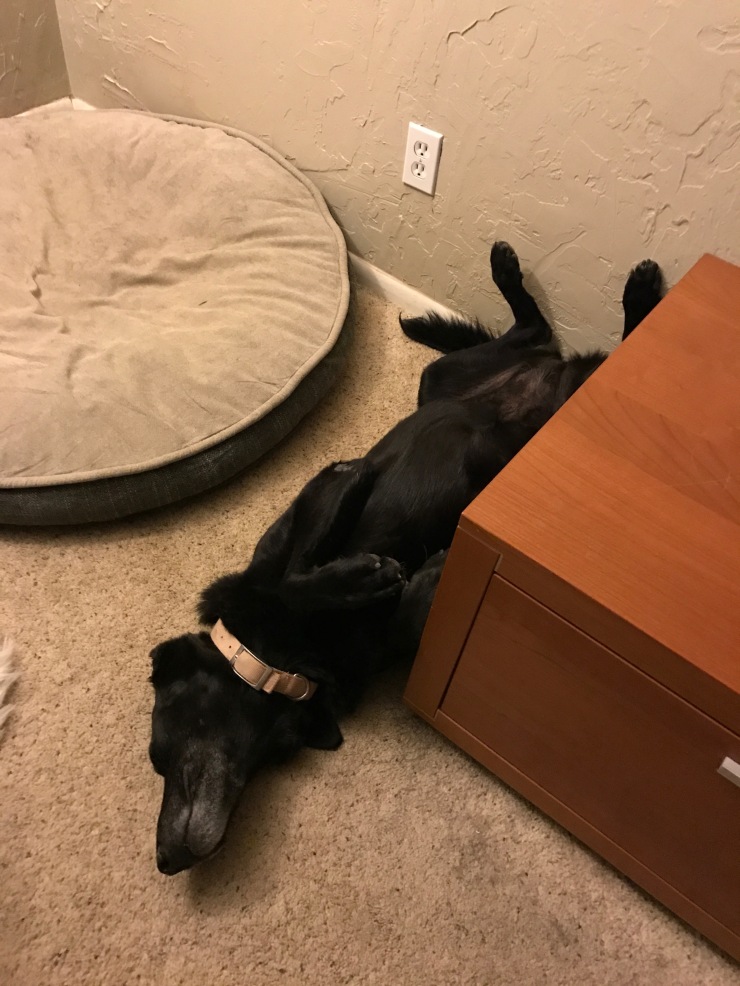 **Yeah, don’t let the lazy demeanor fool you. That dog can hear a door crack open a few inches and make it out of the house in 2.2 seconds.**

It never ceases to amaze me how absolutely wonderful people can be and how much they can…. suck.

Every day in the newspaper and on TV we can see the stories of suckage. So, this is about the wonderful.

We have three dogs. One, I adore even though she wakes up at 4 a.m. and then proceeds to wreak havoc for the next two hours until I actually crawl out of bed. The other two I feed and tolerate. It’s been a long eight years with them. Yeah, they make that Marley character look like a rank amateur. I could go on and on about the stuff they’ve destroyed over the years and the insane vet bills over their stupidity, but I won’t. Instead I will just say that among Dumb Dog No. 2’s many charms is her penchant to bolt at any and every opportunity. Neighbor kid comes over and, being 5 years old, stands with the door wide open and boom, thar she goes. Dumb Dog No. 1 will usually show her allegiance to No. 2 and fly out after her. They go wilding through the neighborhood and always come home, so we tend not to sweat it too much. But, we live in a neighborhood filled with kind, canine-loving folks and these people always go out of their way to try and corral them. Which is simply amazing if you ever saw these two. If you’re familiar with the second season of “Stranger Things,” remember the demodogs? Yeah, they are spitting images of our very own hounds from hell.

So the other day, we’re doing yard work and the front door didn’t quite get closed. I was moving rocks when two black streaks rushed by. I yelled, but knew it was pointless. Those boneheads were gone.

Everyone mobilized — one kid went to the backyard alley, I walked to the end of the street while Joe wandered another direction and the kid who can drive, hopped into her car. One stayed connected to the couch and YouTube because you never know if there could be some sort of viral video waiting to break.

Before long my cellphone rang. It was our neighbor down the block.

“Let me guess, you saw my dogs terrorizing the neighborhood?” I asked.

She had indeed spotted the two loping near an alley, and a young man was trying to grab them.

I hopped into the car and headed in her direction. Sure enough, there were those two idiots. A guy, about 18 or 19, was in close pursuit.

I hit the button for the van door, which slid open and the dogs hopped in, panting and looking supremely pleased with themselves.

“Those your dogs?” asked the young man, who was panting almost as much as the pooped pooches.

“Yes — thank you so much for your help!”

He bent over to catch his breath. “I almost had the one, but the other one took off.”

I offered him a ride to his car and continued to thank him profusely. He shrugged it off. “I love dogs.”

I *used* to love them. These two may be turning me into a cat person*.

*UPDATE: I am not going to be a cat person! If I can get my hands on what is the hot toy of the 2017 holiday season (no, not a Donald Trump doll with real hair you can style but a Fingerling), then I shall become a ROBOT person. How cute is that little sloth? It’s adorable — and no pooping, no feeding, no barfing and I bet it can be turned off, which cannot be said of my current non-robotic pets.