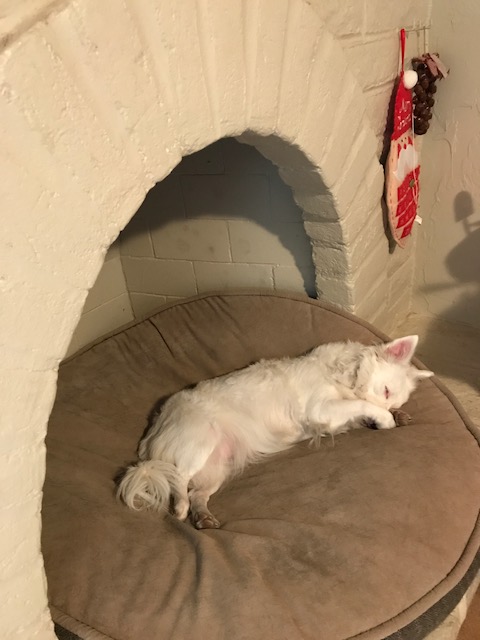 Question for you: Can dogs be Catholic?

Asking for a friend — who happens to have four legs and a very waggy, fuzzy tail.

She appears to be suffering from some wicked Catholic guilt. I would know because I was raised Catholic. So, here’s the sitch:

Little Miss no longer has a dog bed in our room because she consumed two of them. She has the midsection to prove it. Now she’s relegated to the plain, ol’ carpeted floor and she curls up, right next to my side of the bed. But now that it’s no longer 90 degrees — can I get an Amen?! — and there’s actually a chill in the air, she likes to snuggle. Not with me because no dogs are allowed on the bed. My spouse’s rule — not mine. He didn’t much like when I would allow the kids to sneak into the bed either. Dude is not a snuggler. Dog No. 3’s snooze buddy of choice is No. 3, who not only is an incredibly deep sleeper but also has a conveniently low bed — win, win for a little pooch.

At night, she makes a show of winding her body up in a circle next to my nightstand but before long, her little nails clickety-click on his wood-laminate floor (I have transformed from a nothing-wakes-me-up sleeper to one awakened by any and everything since having kids) and then I hear her jump up onto the bed. And really, it’s absolutely fine with me that she sleeps in there. My feelings are not hurt. But, she will leave his room, prance into ours, plop her feet onto my side of the bed and stick her nose in my face until I pet her. Once I do, she hops down and goes immediately back into No. 3’s room.

This happens repeatedly throughout the night. It kinda sucks, but it also sweet. Who else but a dog loves you like that?

Anyway, I interpret this behavior as her looking for absolution. So, if she were Catholic, then I could just drag her to confession. She could purge her guilty, furry little conscience and I could, at last, get an uninterrupted night’s sleep.