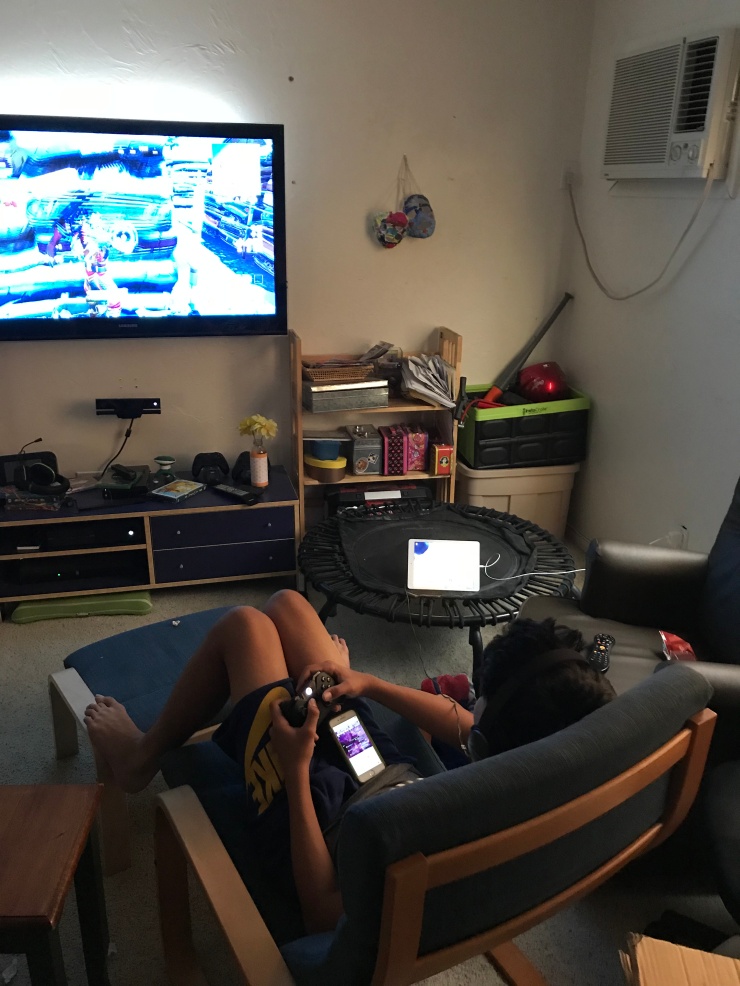 Yes, that kid actually has three screens going all at once: The big screen has the current Fortnite game, the iPad on the trampoline lets all his friends in on the scintillating action of watching him move the game controller, and I’m guessing the iPhone is so he can see the latest Instagram posts.

A plague is upon us.

Well, some of us anyway. Specifically those of us with teenagers in the house.

This insidious epidemic infects their young minds, severing their contact with reality and rendering them oblivious to time and parental yelling, no matter how loud or insistent. It turns their eyes glossy and bloodshot. Slowly, they stop eating, stop sleeping, stop… showering. It’s pretty brutal.

This thing, this contagion that has struck our youth and is holding them hostage in its addictive grip, is called Fortnite.

I hated it right off the bat because of the ignorant spelling of night. Then, it started moderately disrupting our home life, prompting No. 3 to voluntarily place himself in isolation, in the back playroom, where still we can hear him throughout the house as he shouts at his friends in his deepening, Rice Krispies (It snaps! It crackles! It pops!) voice. He props up his iPad on the mini trampoline that no longer gets used so he can FaceTime with his teammates. Is  there anything more exciting than watching another kid play a video game? I think not. No doubt it’s probably better than quite a few YouTube videos.

For those unfamiliar with the game, allow me to illuminate, even though I don’t know a whole lot about it except that it’s supposed to be kinda Minecraft-ish. I’ve passed through and seen what looks like a shooting game and I suppose I could spend some time and really watch No. 3 play but, you did read that part about how these kids start ignoring basic hygiene, right? Doubly bad when you’ve got a kid smack in the smelliest life stage of all who often forgets his deodorant. So, I’ll let this Wikipedia entry explain it: “Fortnite has up to four players cooperating on various missions on randomly-generated maps to collect resources, build fortifications around defensive objectives that are meant to help fight the storm and protect survivors, and construct weapons and traps to engage in combat with waves of these creatures that attempt to destroy the objectives. Players gain rewards through these missions to improve their hero characters, support teams, and arsenal of weapon and trap schematics to be able to take on more difficult missions. The game is supported through microtransactions to purchase in-game currency that can be used towards these upgrades.”

So it is a shooting game, which is controversial, and you can spend actual money on a virtual world, which is just stupid, but it also encourages teamwork and cooperation, infinitely valuable here in the real world. Where we shower regularly.

Nearly every teen — mostly boys but not all — I know is addicted to this game. Addicted. When they’re not playing, they’re talking about some triumph in Moisty Mire, which I’m thinking about renaming our playroom because it smells just like what I would imagine a place called Moisty Mire* does.

A friend of my husband’s was talking about his two sons’ addiction to the game. The friend admitted that had this game been around when he was in college, he would have dropped out. “It’s awesome — you can play with your friends and not even have to leave your own couch!”

So while we moms swap stories about how annoying it is that our kids have to be dragged away from the TV for meals and they’re slacking on chores and homework, I’m thinking maybe we should try and focus on how maybe it’s not all bad? At least the kids have to work together. Also, there seem to be strong female characters, or at least female characters with strong glutes anyway. In fact, my own son is often a woman in the game and I hope that means it’s because he’s a well-raised, 21st century male who sees women as equals — and not because one of his friends paid him $5 to do it.

While researching Fortnight (I refuse to play into the dumbed-down spelling), I came across tips, which, when you think about it, are pretty much good rules for life so maybe this game is doing some solid parenting for us, too:

• Use headphones (True dat. We parents are never without our noise-canceling ones)

• The circle is all that matters. (True, a doughnut is a beautiful thing)

• Drink shield potions immediately  — most of the time. (Yes, the longer you let them sit, the more the ice dilutes the wine, er, shield potion.)

• Do not loot bodies straight away. (Sure wish someone had taught me that when I was 13)

• Cover is destructible, always have a Plan B. (Never be without a Plan B)

So, that’s Fortnight. And now that we all get it and might even be coming to terms with it, that means something new is going to come around and this will start all over again. Heaven — or Moisty Mire — help us all.