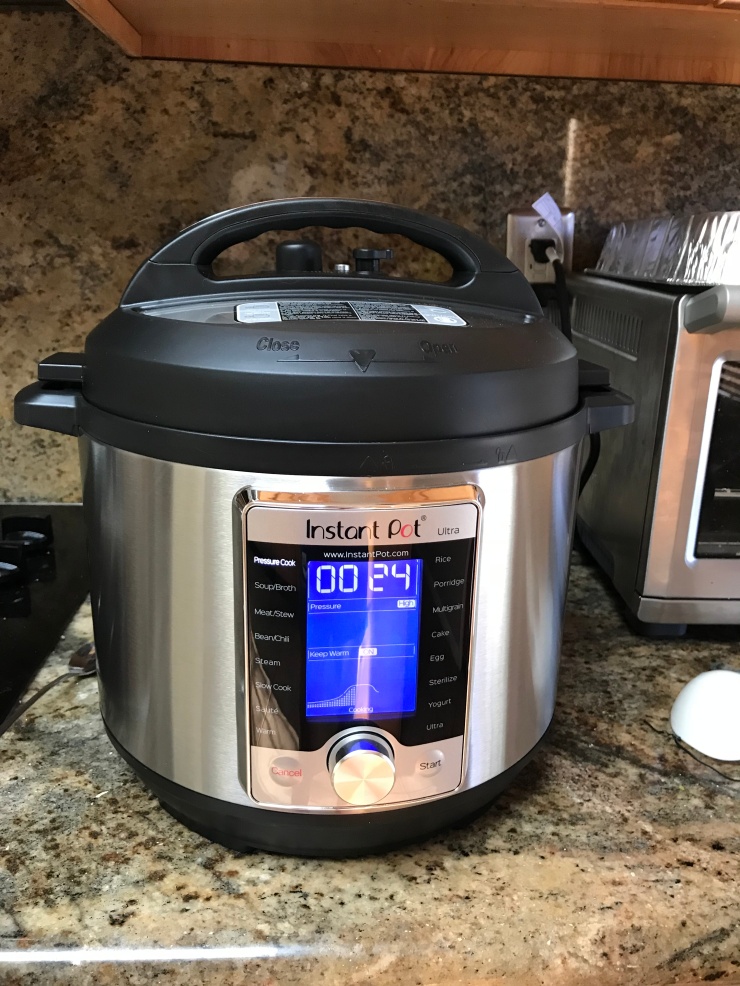 One day — probably five months ago — I offhandedly mentioned to my husband that I thought I might want an Instant Pot.

I never thought anything would come of this because years before online shopping existed, I used to leave out catalogs, open to a specific page with a specific item and size and color all noted in Sharpie. They would be strategically placed on the coffee table a few months before Christmas, around my birthday and my anniversary and Valentine’s Day. Nuthin. The hints were never taken. So why would I think he would listen to me now?

Except that, this time, he did.

So, on Mother’s Day, I stared at a big, heavy box, wrapped in star-studded, glitter* paper that I had not hidden well enough in the storage closet because I wanted to use it for this coming Christmas. After carefully ripping the paper (but not well enough to save and reuse it), I discovered — ta da! — an Instant Pot.

My brother-in-law has long preached the power of the pot. He loves his. Other relatives and strangers worship its quickness in social media. Beans and ribs and all manner of dinner-y things cook faster than a microwaved Cup Noodles. Sounded like a miracle.

The Instant Pot is basically a 21st century pressure cooker, but without the scariness of its 20th century predecessor. My mom had one when I was growing up, and it terrified the hell out of me. I kept a wide berth from the kitchen when that thing was spitting and venting. The metal circle on the lid jiggled around like it was exorcising steamons**. I thought for sure one day someone would lose an eye because of that thing.

When my mom gifted me a pressure cooker that belonged to my grandmother years ago, I immediately gave it to Goodwill. I wanted no part of it.

But the Instant Pot, it seemed different. Better. Less horrifying. Until I started reading the directions. I hate directions, I have no patience for them, but I am also still very scared of losing an eye and so because it came with so many orange and yellow warning stickers all over it, I couldn’t *not* read them. So, I washed the thing and decided to give fast-cooked beans a whirl.

“What the heck? Is this thing on?” I said, jamming buttons and twisting knobs.

“I think you’re turning it off,” said my oldest, smartest child. “It’s like the toaster oven, just push the button once.”

I did and it appeared to go on. But then, to my chagrin, I realized I didn’t exactly follow the recipe properly. I was supposed to do a 10-minute precook with 4 cups of water AND THEN cook the beans for another 10 minutes with 2 cups of water. Whoops. When the initial 10 minutes were up, sure enough, crunchy pintos. Dammit. So, I decided to wing it. Threw in a few more cups of water and set that sucker on pressure cook for half an hour.

When my husband came home, he was happy to see my gift already in use.
“Ooooooohhhhh,” he said. “Whatcha making?”

“Yeah, don’t get excited. I think I already screwed things up.”

I don’t know when the timer went off but all of a sudden, the pot was in warming mode. I closed my eyes, turned my head and tried to unscrew the top. Nope.

My husband came over. “Maybe you have to vent it first?” He started hitting buttons and I winced and stepped back. The pot whistled and a whoosh of steam shot out. The lid twisted off.

I fished out a bean. Not crunchy!

I think I better read through the instructions again before attempting another recipe. Maybe this time, I won’t multitask by reading my email at the same time. Or, perhaps I’ll just turn dinner over to Dog No. 3. She has this super annoying habit of licking the dirty dishes and dishwasher as it’s being loaded. Last night, her tongue accidentally programmed a cycle while she was going after the dinner drippings, which was pretty impressive because I only have a 50 percent success rate at setting that machine.

*Gold glitter is now everywhere… on the scissors, the floor, the dining table, the chairs, my husband’s face, which made me laugh because he looked like he was trying to be a middle-aged “Twilight” vampire.

Peanut butter + chocolate = yumness.
Bring it, Wednesday! I now own @lemonhead.la glitter hand sanitizer. I can handle anything.
It may be Tuesday during a global pandemic AND a forecast of triple-digit heat, but fresh flowers in the house make life better.
@donutbartucson is an appropriate way to celebrate the unofficial start of summer.
This girl. She did it. She graduated! It was a long road, dotted with speed bumps and a few car-swallowing potholes. It wouldn’t have been possible without her determination and the dedication of teachers at Fruchthendler, Dodge and Rincon. She didn’t walk across a stage to applause, but she did stand in her driveway and listen to honks and cheers from her favorite Rincon teachers. What a treasure they are. What a gift she is. #rinconpride #classof2020
And then there was one... When @crossfitcure started this month’s challenge and I actually looked up those WODs, I thought, “I don’t really need a free shirt.” But @beccauseiwantto and @lacycro got so excited and so I got swept up into it, too. During this insane time, crossing off Bingo squares gave me — I think all of us — a goal and a sense of normalcy and control and power. We felt strong. I never thought I’d actually do all that on top of regular workouts. Murph on Monday is all that’s left. As @gene_mcdougall would say, “Go get it!” And I guess I’ll clear out some space in my t-shirt drawer. #crossfit #wod
My Tweets
%d bloggers like this: