I am still pulling a Dead Pool. Sadly.

My face is still flaking off and it’s horrible (if you missed it, here). It’s like my skin is attempting some sort of arthouse production of “Face/Off” — without my permission.

So, I’ve been doing all this weird stuff because my friend Jenni who isn’t an MD but knows her way around medical websites diagnosed me with seborrheic dermatitis. Remedies for this have included: washing my face with dandruff shampoo (which made it so tight I looked like I’d had a facelift, which was good, but it also made my face even more flaky, which was bad) and then I picked up this cream from Walgreens that was the worst smelling thing I have ever rubbed on my face — and this is saying something because I have kids and dogs. Finally I snapped off an aloe branch and rubbed it across my cheeks and neck and went to exercise.

I started noticing a distinctly unpleasant smell almost immediately. Like raw onions with smelly socks. Great, I thought, now my skin is coming off and I have BO. But I realized I wasn’t actually exercising hard enough to break a sweat, so I hopped off the elliptical and grabbed the aloe. That was the source of the stink! So, here is the public service part of the post — beware if you’re gonna use aloe vera as a home remedy for anything.

Also, turns out my friend Dr. J wasn’t too far off — I do have dermatitis, but an actual MD says contact dermatitis, which some more googling revealed is caused by something irritating the skin, which can be skin products or even laundry soap or — even more ominous —  cleaning products. So just to be safe, I think I’m gonna stop with the housekeeping. I don’t want things to get worse. 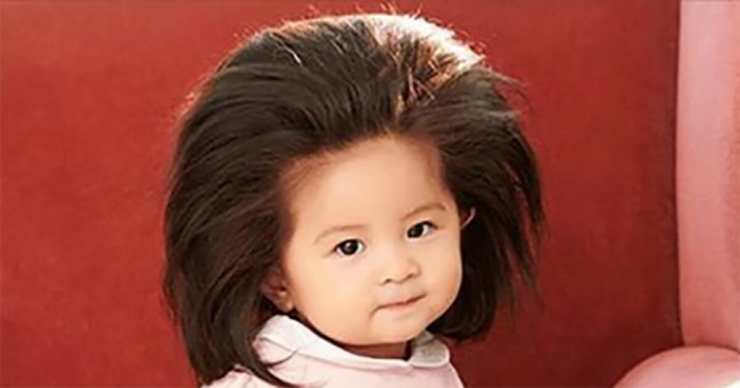 Have you seen this adorable kid? Or more specifically, have you seen this cute kid’s HAIR? The toddler just landed a Pantene deal based on those lush locks. Not to sound like a hater, but she needs a better stylist. This ‘do ages her so much. She looks …. 5. It’s a style much more appropriate for an Asian grandmother and I would know because my family’s Filipino and this ‘do shows up in a lot of family photos.

This will probably came up in a therapy session years from now, but I made one of my kids — on a day off of school — take pictures of my backside in my different jeans and sadly, I  discovered that none of them is at all butt flattering. I really don’t want it to be my butt’s fault, but at the same time… jean shopping for better ones? Ugh. Hard to say which is worse.