I’m not feeling blue so much as I’m seeing blue. Everywhere.

While most people find this hue serene and calming, that is definitely not the case here. Blue is perpetually on my hands, the tub, towels, the backs of shirts and jackets, but mostly all over my middle child. Guess what? Smurf happens.

‘Kay. I’m fine with that. I myself am a veteran of one-time purple hair… 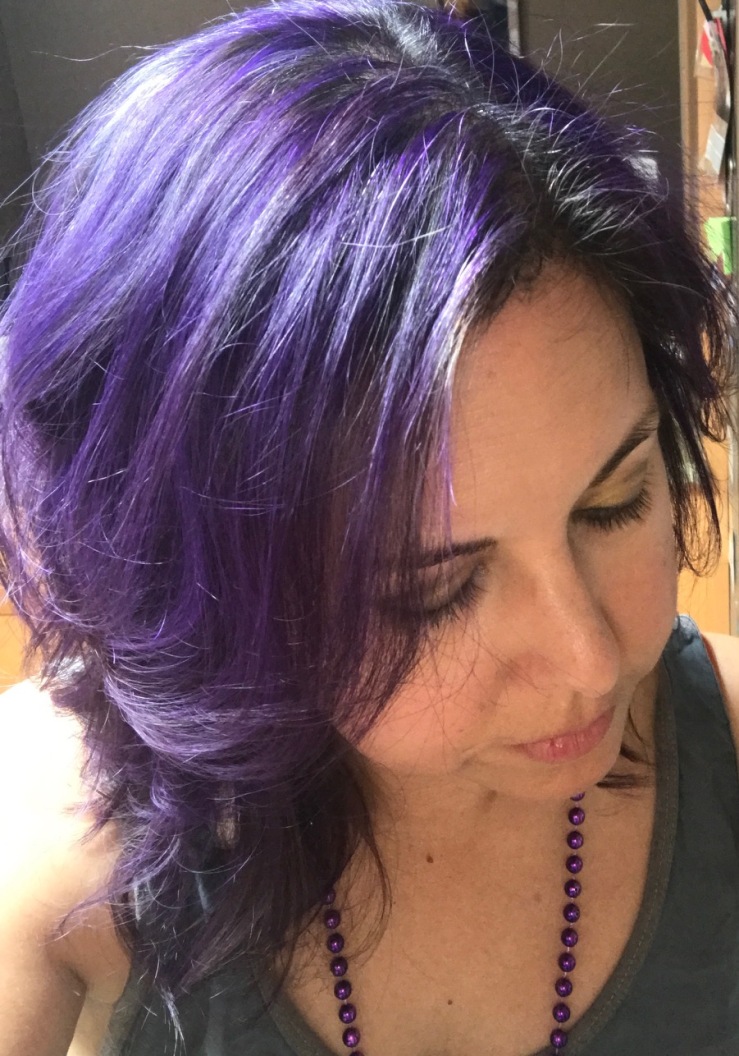 No. 2 was willing to spend her own Christmas money to get the dye job done — until she found out it would be allllllll her money. I offered to give it a shot. Because she’s young and largely unfamiliar with my typically ill-fated DIY projects, she was game.

So we made an early morning Target run, picked up blonde hair color and then she picked out a navy blue along with an aqua shade “for later.” Both were on sale. Sweet.

I slathered on the bleach and watched her medium brown hair lighten into Kim Possible orange. Not light enough. We made a second trip to Target for a box of platinum dye. This time, it lightened more.

She was delighted with the result. Problem was, that darn blue didn’t just stay on her head. It migrated. She had smears on her face and ears, to be expected. L’Oreal warned of potential color transfer if hair was wet, but it turns out that Colorista is more like Liarista because that stupid stuff gets everywhere. Doesn’t matter if the hair is wet or dry that dang blue rubs off. No. 2 took her first shower post dye job and her entire torso and face were blue afterward. We had to really work at it to make her not look like Mystique.

I’m a little worried she may never regain her regular skin tone. I guess I could always send her off to the next “Avengers” movie audition. In the meantime, though, that $6.99 box of #Turquoise650 Colorista is definitely headed back to Target.

The exact color of a prickly pear margarita. #desertlife
I haven’t had time to do writing that wasn’t work-related, but I made a point to blog. How could I not since I gifted myself a #ukulele lesson with an *IRL* teacher after mostly relying on @rickysomborn and @brookepalmermusic on YouTube?! If you have any song requests, you know where to find me...😜 As the cool kids say, link in bio (you have look under “latest posts”).
I call this photo* “All The Cake I’ve Eaten In The Past Week, A Retrospective.”
Whether you nurture fun-sized humans, animals, green things or everyone you meet, Happy Mother’s Day. I would like to note that this plant, whose tag says Milagro, has now managed to live for AN ENTIRE WEEK. Miracle indeed. (I’m coming for you, @theseednut.) But I’m really much better with people than plants. 💝
We went out to dinner for the first time in...a loooong time. The @commonerandco patio dining was lovely. Here’s to coming out on the other side. Cheers!🥂
Time to turn on the butt seat fans. It’s gonna be a looooong summer. #desertliving #hotstuff
My Tweets
Loading Comments...
Comment
×
%d bloggers like this: