Skip to content
And then there was one… kid in the house.
That hasn’t happened since 2000, and it feels so very weird.
See that photo there? No. 1 was 9 months old. She had another year-ish of solitude before she no longer had our full and complete attention. It was a good run. 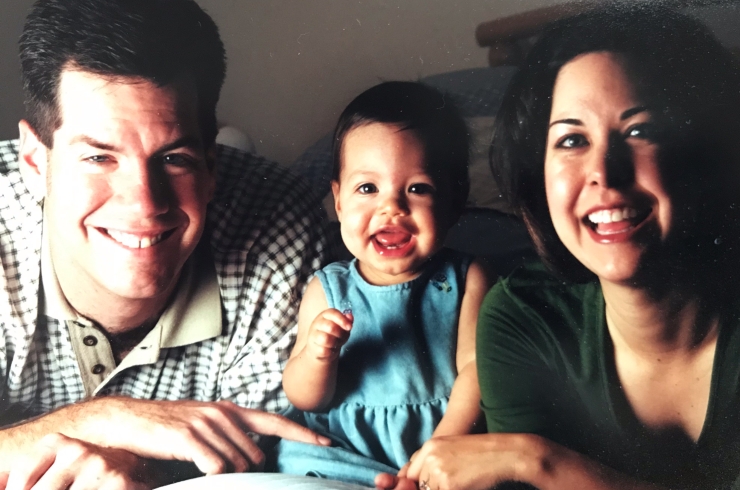 Now she’s off in California, in her first year toward ensuring my retired life is really, really cush by studying software engineering in college.
That leaves two still in the nest except this week, No. 3 is in DC on a school trip.
I dropped him off at the airport at 4:45 a.m. on Saturday — a treat for us both — and received an obligatory bro hug for my trouble. Not complaining — it was more than some parents got. He sauntered off, laughing and talking with his friends and offered up not even a little wave or the tiniest furtive glance back at me. Of course, I was pretending to run alongside the eighth graders, mock crying, so maybe he was trying to act like he didn’t know me.
Teenagers have never really been my demographic. But let me just say that shtick KILLED with the moms.
Ugh. Boys.
So much less drama, so much less everything.
The early morning I dropped off my oldest daughter for that same trip five years ago, some poor girl had an incredibly epic meltdown, which broke all the mamas’ hearts. Nonchalant boys are easier, I guess, although they’re heartbreakers in different ways.
When I was a young teenage girl, I was tormented by the lack of attention from teenage boys. Guess I still am, by one in particular.
After the initial text that No. 3 had arrived at his final destination — along with some bonus selfies that included his friends asleep, mouths hanging open — that was it for any typed communication.
In his defense, kids aren’t allowed to have their cellphones out except in their rooms at night and early in the morning.
Still, some kids are sneaking texts and photos to their parents — I know because I’m in on a text string with a bunch of moms who share when they hear from their babies.
Mine is stone silent. But then, he’s not really a rule breaker, nor is he really that into communication, unless it’s to ask what’s for dinner.
I had to nudge him into a guilt text the other night. 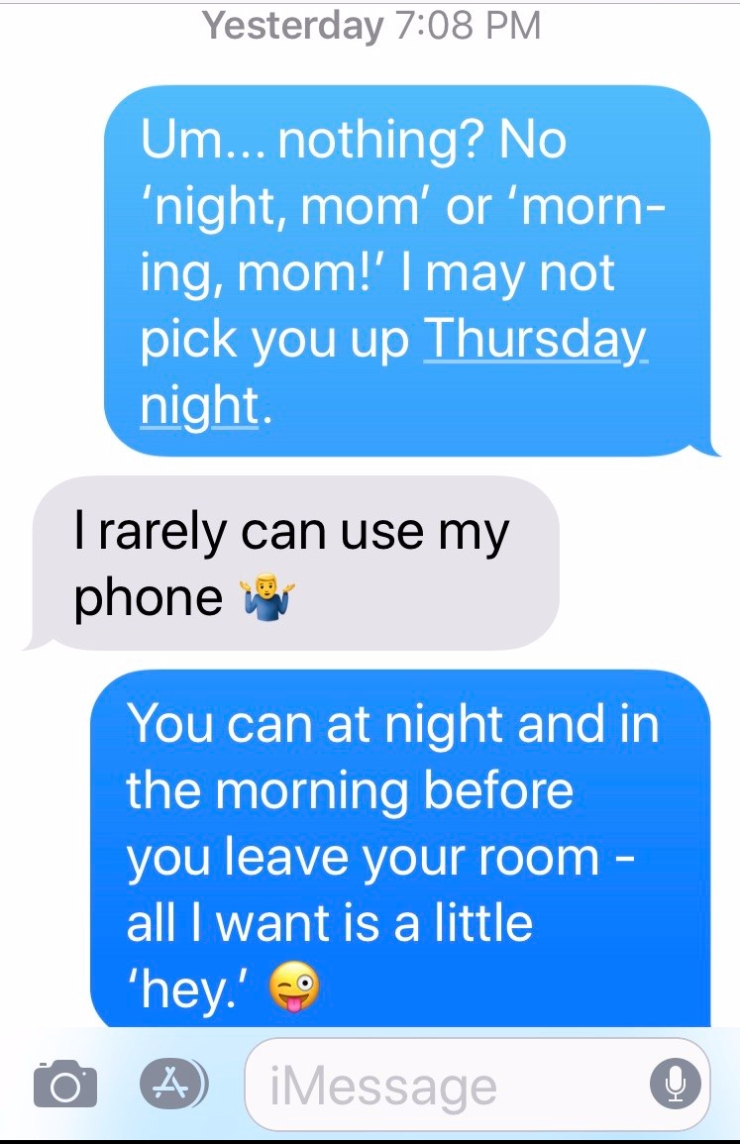 Honestly that is not so much to ask.

You can tell how upset I am because I made a grammatical error in that text and didn’t fully punctuate, which I always, always do. I don’t care that using periods and quotes is the sign of oldness; it is the right thing to do.
So now I know what it will feel like when he skips off to college. He’s not the type to come home to do laundry, which you’d know if you saw his room. Guess I’d better figure out how to use that tracking feature on my iPhone if I want to keep tabs on him. And, just to show you even more the difference between sons and daughters, No. 1 used the tracking device on me Saturday afternoon when she wanted to FaceTime and I hadn’t answered her texts in awhile. I love that.