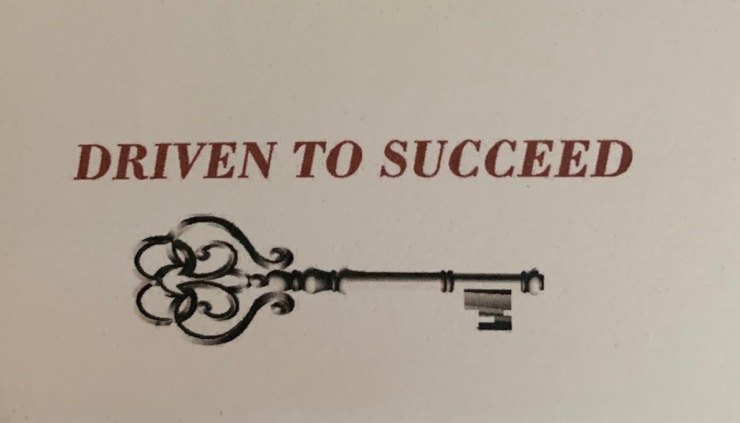 Fun Fact: “Today” show co-host Savannah Guthrie and I went to college together.

The TV journalist and I never shared any classes, but we’d run into each in the mold-riddled basement that used to house the University of Arizona journalism department. She was always really nice and yes, she always had those cut-glass cheekbones.

Cheekbones aside, it’s actually quite weird how parallel our lives are:

• We interned at the same a local TV station.

• She went on to network television, I — deciding I couldn’t handle the stress of every day being a perfect hair day — swapped a media career for print and instead have regularly guest-starred in all of our home movies.

• She wrote books about princesses, I happen to be a princess who wrote a book.

But eeriest of all — she gave the commencement speech at George Washington University. Get this:  I, too, was asked to be a graduation speaker. For eighth grade.

This caused me no small amount of stress in the last few months as I struggled with what to say and, maybe even more, with what shoes to wear for such a momentous occasion.

I’m happy to report, I did it! I survived and miraculously only choked up a little as the school sweetly twisted the knife a little further into my stomach by having my son introduce me. That was a lovely but emotionally deadly move for someone like me who tears up embarrassingly easily.

So, because it is the first true official day of summer, and I have no other pressing news to share, here is the transcript of my very first graduation speech*:

I remember first setting foot on St. Michael’s campus 9 years ago and just being blown away by how happy and well-adjusted the kids were and I thought the faculty and staff were amazing, very welcoming and nice and so it stunned me to realize … I was wrong.

Y’all have a serious mean streak. Asking an eighth-grade parent who can barely hold it together to speak at graduation? That is just cruel. So let’s see if I can do this.

Almost graduates — you don’t have your diplomas yet — this speech is for you. Even though it doesn’t seem like it because you’re looking at the back of my head, which is actually better because now you can yawn as much as you want and I will never know.

So let me just say that if it wouldn’t take up so much time, I would walk up to each and every one of you… and shake you. Not hard but just enough to get your attention because what’s wrong with you?!

For the past two weeks, well way longer than that based on what I’ve heard in my house, you’ve been saying that you are so over middle school. You’re done. Enough. You’re tired of chapel and uniforms. You’re ready for something new. I get that, but let’s take a minute to appreciate all the good stuff.

You were with classmates and teachers who know you so well. You have all this shared history from your awesome class trips — like listening to David Nighteagle play multiple flutes using all the holes in his face, swimming in the toasty-warm Pacific Ocean, watching Mrs. Divijak bust a move at the wax museum dance.

These are uniquely St. Michael’s experiences like Declamation Day and Ludi Romani. Treasure those memories.

Also, I don’t think you realize how much extra sleep you’ve been able to get over the years because you never had to worry about what to wear. Navy or white or red. You could get dressed in 30 seconds.

Someone drove you to school every day and I realize you are probably pretty excited at the prospect of getting your driver’s permit and then your license but all that means is you’re gonna have to drive your younger siblings around and run errands for your parents and — get up early so you can find a parking spot at school.

Yeah, high school is going to be quite the new adventure. And so — as someone who’s been there — I have some advice for you incoming freshmen.

•Tip No. 1, the most important thing: Pie counts as breakfast. Some people will argue that it’s dessert — and if it’s a chocolate pie, then technically yes it is — but if it’s a fruit pie, that is totally OK to eat guilt-free for breakfast.

•Don’t worry. Worrying is wasted energy and it has so many  negative consequences. There was a study — presumably real, I read about it on the internet — in which people were asked to write down their worries and then identify which of their concerns actually happened and the study showed that 85 percent of what people freaked out about never happened. And even in those cases when stuff did happen, something like 80 percent of the subjects discovered they could handle it or that they ended up learning something from the experience.

Also, stress shrinks your brain and you need to do well on AP exams and SATs so don’t worry.

•Don’t compare yourself to others because that’s dumb — there is no one else out there who is exactly like you.

•Don’t be scared to try. It’s human nature to be concerned about doing something new but here’s the thing — you will not fail. You know why? Because failure is not an option. And I don’t mean that in a demanding, Tiger mom way. I mean, don’t think in terms of failure. Think of it as learning something new. You’re trying something out and maybe it’s fun or maybe you discover it’s not your jam. For me, sorry Mrs. Breault and Mrs. Gould and Ms. Murphy, this was math — and you know what? I did not fail at college algebra and geometry, I just learned I am much better with words.

So, that was a lot of don’ts, now let’s focus on things you should do.

•Give people the benefit of the doubt. Don’t assume someone is acting a certain way for a certain reason. You don’t know what’s going on in someone else’s life.

•OK, this one you probably heard on your very first day of school and now you’ll hear it on your last: Be nice.

•Have faith — in yourself, in others and in a higher power.

•Dodge, duck, dip, dive and dodge — I stole that from the movie “Dodgeball” but still, useful in a really crowded hallway when you have only five minutes to get to class.

•Little things matter. Smile at a stranger and say hello — that simple kindness might turn someone’s day around. It’ll make you feel good, too.

•OK, and one fashion tip because you have been wearing uniforms all your lives and so it is entirely possible that you may not realize that it is never acceptable to pair denim with denim.

•This one’s a biggie, too: Pick out a promising spot on the bus — not the school bus but the Battle Bus. If you see structures, that is more likely to mean loot but choosing isolation will give you some breathing room while you get set up. And be adaptable during this landing phase by keeping your eyes open.

If that made no sense to you it’s only because you don’t live with a teenager who’s obsessed with the video game Fortnite. But that part about being adaptable? That works really well outside the Xbox, too.

And I know you’re probably going to forget or flat-out ignore most of what I said, and you’re still going to worry and be nervous to try something new and you’ll get up some mornings and you might dread the day ahead but things will start looking up if you remember the very first thing I told you and have a slice of pie for breakfast. But not ala mode because that’s just excessive.

Congrats, class of 2019. May you always be driven to succeed on the Battle Bus of life.

*I actually opened with a joke about how even though the bar had been raised for graduation speakers — ya know ‘cuz that billionaire said he’d pay off Morehouse students’ grad loans — I wasn’t paying anyone’s tuition. It got a few polite titters but one hearty guffaw from the teacher closest to me. Thanks for that, Dr. A.