I’m so happy to be married in the 21st century because you can just squabble in front of everyone *and* get that outside validation that proves you were right.

For instance, the other night at dinner we were talking movies and “Bill and Ted’s Excellent Adventure” came up and I said it was my favorite movie in high school and all my children were stunned. STUNNED. Apparently that one doesn’t hold up over time.

Anyway, my son started talking about Keanu Reeves and my husband who — in all the years we’ve had a subscription to People magazine has never even acknowledged any kind of celebrity gossip — pops out that he is married to Winona Ryder. Has been for years.

“SHUT UP! No he’s not,” I said, going through my mental People Rolodex. It rang slight bells but I remembered it as a publicity stunt. “Totally not true.”

The kids all jumped in and started arguing that yes, it was. Which led to Googling and the The Truth that technically they were married.

My husband grabbed his phone, quick to mock me on social media, as I had done unto him just the week prior when he innocently asked (seven years too late) if Ashton Kutcher and Demi Moore were married.

Which then led to this… 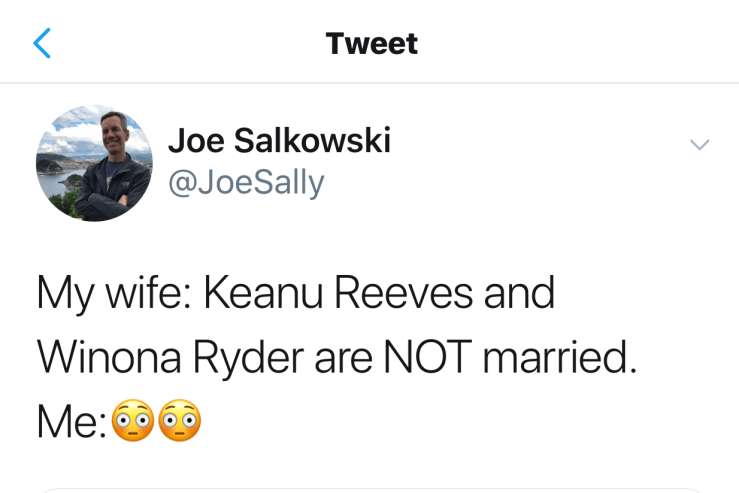 At least two out of three kids were amused — they supplied the two likes.

*If I have to explain to you that those are tweaked lyrics from “Kung-fu Fighting,” then we can’t be friends anymore.