What happens in Vegas doesn’t stay in Vegas — if you invite me.

Nope, it’s going out on the blogosphere to all the people who were really looking for  “The Real Housewives” but their fingers slipped and so instead they landed here. Suckers.

But really, all the secrets are still safe. Since this was for a 50th birthday party with a bunch of longtime married couples who are also pushing the half-century mark if they aren’t there already, it’s not like there was any skeeziness or accidental drunken face tatts or wickedly felonious behavior.

Plus… Vegas. Is anything illegal there? I mean, people walk the streets like this: 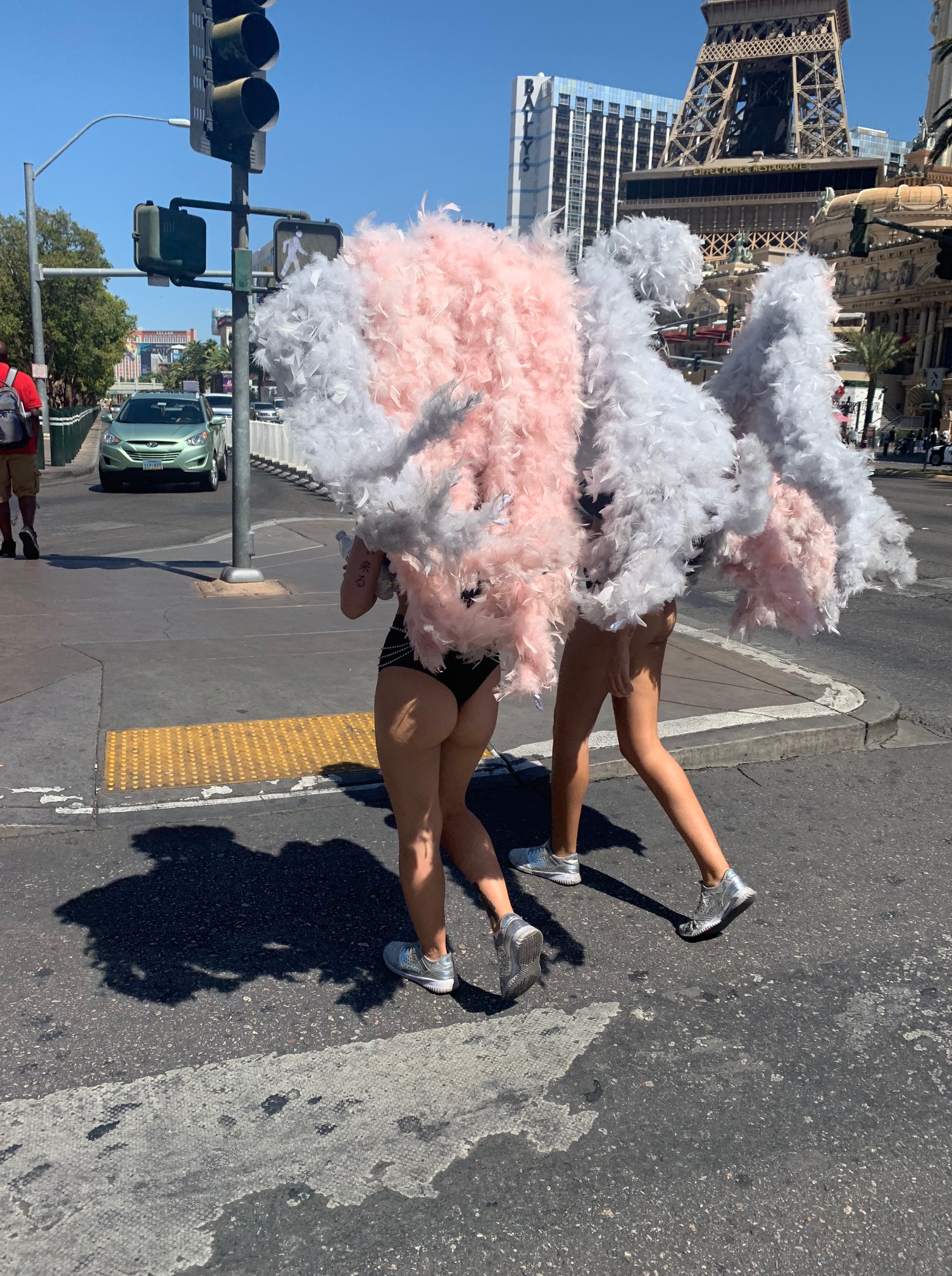 I was happy to see the sensible footwear and almost laughed at the juxtaposition until they turned around and I saw the rhinestone pasties on their boobs and the beginnings of a sunburn in places where the sun shouldn’t shine and faces that were maybe 19, like my kiddo, and all I could think is, you are someone’s daughter, and it made me really sad that this was how they were paying for rent or Starbucks and that young women think it’s OK to make money this way or worse, if they had to make money this way. And then I was just jealous because no one would ever have paid me to dress like that, even at 19.

So, how did I end up in Vegas this past weekend? Glad you asked.

Months ago, my husband informed me that one of his oldest and dearest friends was having a 50th birthday bash in Vegas.

“Do you want to go?” he asked, casually, as he scooped up dog poop. This was on the early morning dog walk so it’s not as weird as it sounds.

And that was that… until Tuesday night right as we were dropping into bed and I was about to snap off the light.

“So, I think you should come to Vegas with me. I want you to come to Vegas,” he said. “It’ll be fun. We never go anywhere together.”

It was incredibly sweet that he asked. And, it super ticked me off because now I couldn’t say no and this was gonna be an expensive plane ticket because the trip was FRIDAY (you remember that part where he asked TUESDAY NIGHT and he had known for MONTHS), plus I had a crap ton of child arrangements to make in a very, very short period of time and only 48 hours to pack, which I epically failed at. I left town without a razor — or my wallet. I am not the person who should be in charge of loading up the Subaru should an emergency evacuation situation arise.

We stayed at a swank hotel, so swank in fact that I didn’t realize you had to wave your room key card against a button to get anywhere past your own floor when riding the elevator. The first time I ventured out alone, I spent a good 10 minutes sliding up and down aimlessly until I texted Joe that I was trapped in the elevator — and he calmly explained the key swipe. He should maybe be a magician because I never saw that sleight of hand all the times I was in the elevator with him.

The weekend’s main birthday event was a spectacular four-course dinner at the Las Vegas outpost of Philadelphia’s Vetri Cucina, which has racked up plenty of foodie and wine accolades as a top Italian eatery and so you can imagine how amazing it was. Of course, I didn’t know all this until I Googled post-dinner. At the time I sat down in the restaurant’s private room on the 56th floor of the Palms hotel, I had no idea about the magnitude of the meal I was about to eat because, again, I was roped in late and my husband downplays everything. He also neglected to mention that he would be disappearing for one afternoon because of a fantasy football draft. Classic.

Even though I didn’t drink anywhere near enough to truly enjoy the tacky splendor that is Vegas (Boone’s Farm was never listed on any of the wine menus and I’d rather save up for shoes than pay $20 for a cocktail), it was a nice time and Joe’s buddy is such a gem* of a human being and I don’t mean one of those manufactured stones but like Hope Diamond special and so he made it feel like he was celebrating us, like it was each of our 50th birthdays. Which, now that I think more about it, is kind of a jerk move. I’m not ready to be 50 yet and I will likely spend the occasion balled up in a corner until it’s time to eat cake.

Fun Fact: Even though it was the perfect opportunity to sleep in without any kids or dogs around, I got very little sleep because losing at craps and Black Jack makes someone very tired and he snored so loudly that I just gave up and went to the gym to do culinary penance.

I don’t understand why I don’t look like Elle Macpherson now after I spent an hour and a half at the fitness center, which before you get all impressed I should admit was only because … I forgot my room key. Security is so tight that I couldn’t get a replacement card**. Because I am a good, nice wife, I hit the elliptical and then the treadmill and the easy rider, aka recumbent bike, and stayed out until 8:30 a.m. when Snorey Morey finally responded to my text that he was awake and could let me in.

I decided to bring one copy of This. along and tucked it into a stiletto sculpture at the Cosmopolitan because doesn’t it seem like an appropriate place? 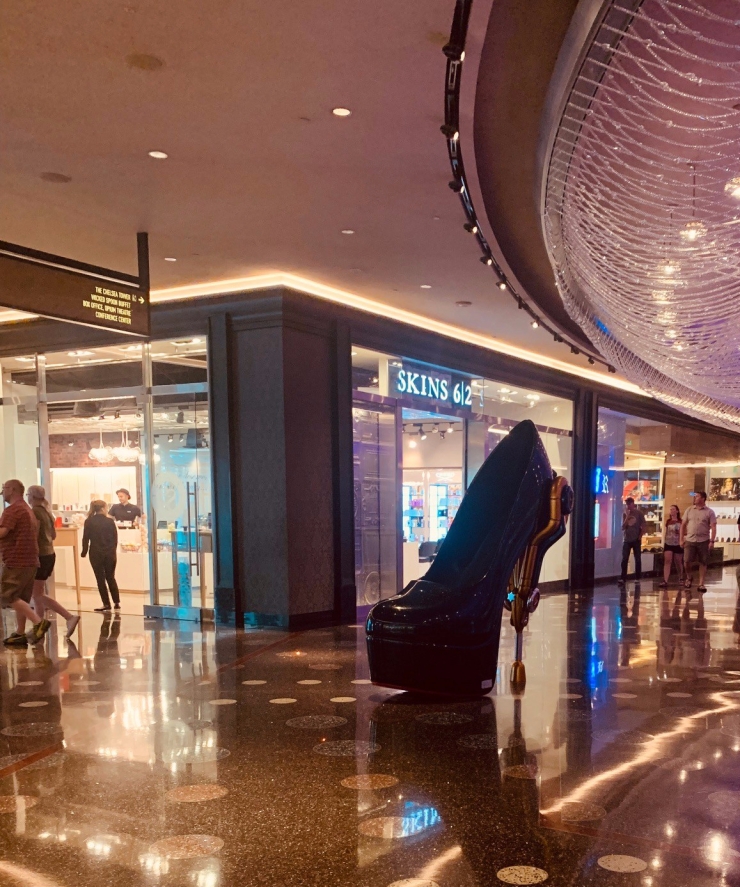 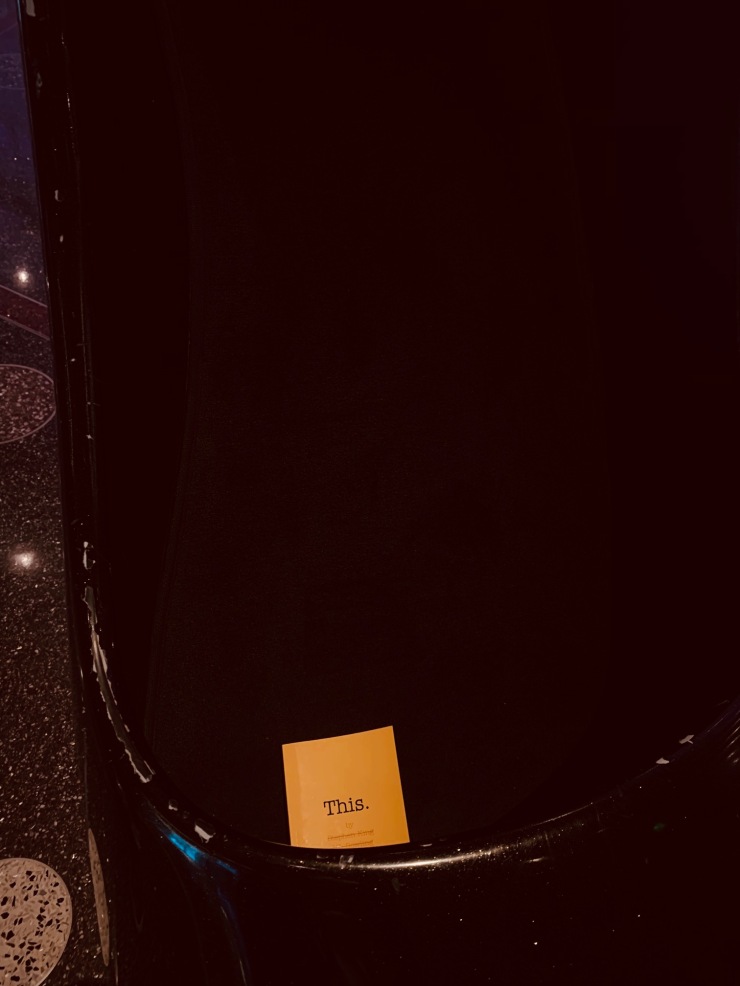 When we sauntered past an hour-ish later, someone had snatched it, which made me so happy and hopefully it wasn’t some paranoid tourist from Iowa who didn’t want to risk getting hundred dollar bills pickpocketed right out of his wallet and so he needed to hide them in a place where no one in Vegas would eeeeeeeever look: inside a book.

*He made place cards — place cards! — and thoughtfully penned a short message about each guest on the inside. I bet he has a Pinterest board. Maybe even three.

**AND YET when I accidentally pressed the alarm button because the lighting was so dim that I couldn’t tell what it was, nothing happened. The elevator didn’t grind to a halt, no firefighters axed the door open and so now I’m wondering if this elevator alarm thingie is some sort of hoax that has been perpetuated by the movies and TV, and elevators aren’t nearly as safe as everyone thinks.