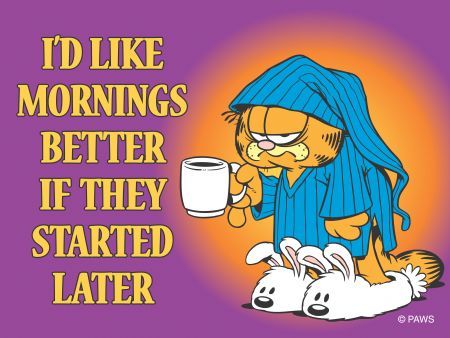 At the risk of sounding like Garfield, I hate mornings.

Oh wait — or is it Mondays he hates?

Probably both. He’s my kind of cat, and there aren’t many of those because I’m allergic.

Mornings are just not my jam. It’s worse this time of year because it stays dark so late and nothing knocks the wind out of your sails more than feeling like your 24 hours is actually 28 since the day begins stinkin’ early in inky blackness.

One dog thinks things should roll at 4:30 a.m. That’s no good. One kid wakes up earlier and earlier as her anxiety about finding a parking spot in the chronically-full lot at school heightens, so she gets up and bangs around. I might as well get up. Yuck — or, some other word that ends in “uck.”

I squirt eye drops into the general vicinity of my peepers and then try to throw off 43 pounds of warm, snuggly covers without pulling a muscle. Disjointed thoughts tumble roughly through my head like sneakers in the dryer: What day is it? What do I have to do? Can yesterday’s good hair day be salvaged? Will my knee feel good or pop completely out of place like some NFL tight end whose injury shows up on highlight reels? Will my thumb throb? Will my feet ache?

That’s the other thing about mornings — they definitely feel harder as you get older.

The dogs, though, they think mornings are The Bomb. That’s when they get their walk, and it is the most EXCITING part of the day, that is, if they don’t manage to escape through a side door and go marauding through the neighborhood. They jump and attempt to follow me into the master bathroom, which can barely accommodate one person comfortably, let alone two-three dogs. Their tails smack into the walls and one “talks.” Really, she does. Remember that old commercial or maybe it was just an internet meme where the dog sounds like he’s saying, “I love you.” Ours says, “F-you. MOVE!”

We leash them up and pull on jackets and hats and gloves and grab a flashlight.

On this morning, it’s damp. It rained, well poured, the night before and this is the only thing that makes the early hour more palatable — the smell of the desert after a rain. If you don’t live in the Southwest, you don’t get it, have no idea what I’m talking about, but it’s creosote that scents the air. Best smell ever, maybe even better than Vicks VapoRub* and it comes from this scrubby, unattractive bush that smells heavenly when wet. It scents the air with the perfect blend of earthy, grassy freshness, like someone scrubbed the rocks and dirt and cactus with a nailbrush and the world smells freshly laundered.

My husband and I don’t talk as we trudge through the streets, the dogs lurching ahead in different directions. My charge mushes like a sled dog, occasionally helicoptering around me, forcing me to move the leash from hand to hand.

Thirteen minutes later, the walk is over. The sun still isn’t up. But the day must go on. Maybe I can write today, and the words will flow like the rain still sluicing through the gutters.

The dogs are fed, so on with the rest of it. They’re good now. Satisfied, until it’s time to be fed again tonight. Unless they hear some phantom noise and lose their minds, they’ll spend their entire day, curled up asleep. I’d really just pull the covers over my head and do the same. At least until the sun comes up.

*True story: I bought some just to sniff because I like the smell. Everyone I’ve told this to assures me I am crazy.

1 thought on “Mornings! Yay! Said No One Ever”