As if the normal, everyday world didn’t already make me feel inadequate, this quarantine and its related crafts are taking it to new levels.

People are working on bettering themselves and learning new things and… I’ve pretty much decided showering is unnecessary at this time.

No. 1’s college buddies are doing age-appropriate crafting: brewing beer and making cider. It made me think that maybe I ought to do a little something extra, too.

Because I’m still 12, I decided this kit for making felted dogs sounded like a good idea. I knew No. 1 would do it with me.

The kit was basically bags of hair and sharp needles. I felt kinda stupid because honestly, if I were just a little craftier, I could have made little stuffed dogs out of all the hair underneath the couch. 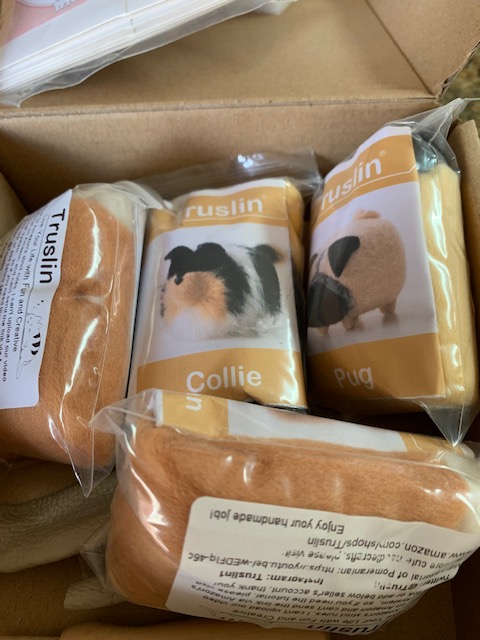 So, instructions were minimal and we had to watch a YouTube video, which actually had instructions like this:

They were not kidding. I jabbed that needle right down into my pointer finger.

My husband snapped around from the computer desk and scolded me. “You know, if you have to go to the emergency room, you could end up getting the virus.”

I only stabbed myself one more time and then ended up with this guy… Ta da. He mostly looks like the picture and is only a wee bit lopsided. 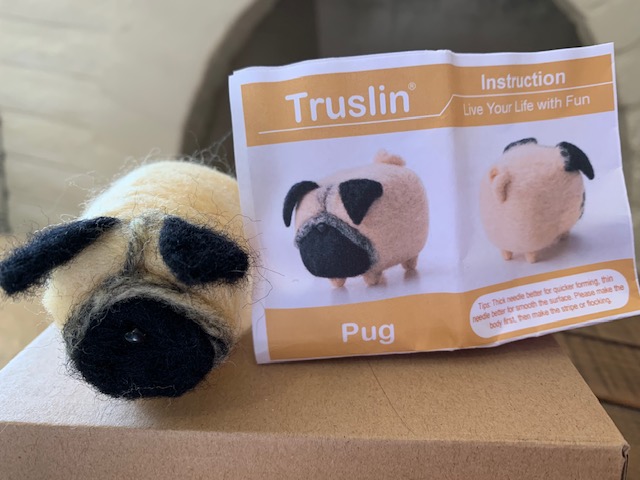 Next up: sourdough bread.

Now, I like to bake and enjoy making bread but I like carbs that require minimal effort, like maybe one kneading and one quick rise and — voila — focaccia! Sourdough bread is not like this, it is like the bread version of a “Real Housewives of Beverly Hills” character.

The starter came free as a gift with my Barrio Bread stash. But, as I was figuring out what to do with it, I wondered how much of a “gift” it was. So complicated! You have to feed the starter and burp it and nurture it. Ya know, I didn’t like Tamagachis back in the day because they were so much work. But, it’s been hard to get bread, so I figured this could be a useful skill.

So, I sucked it up and went to work.

Bubbles! That meant I’d managed to keep it alive for one whole day. I have a pretty good track record with dogs and kids, but yeast is so sensitive and complicated that I wasn’t sure how this would go.

After some rising and other stuff, I was supposed to put my dough in a bread basket. Of course I didn’t have one. I decided this plastic tray would do. 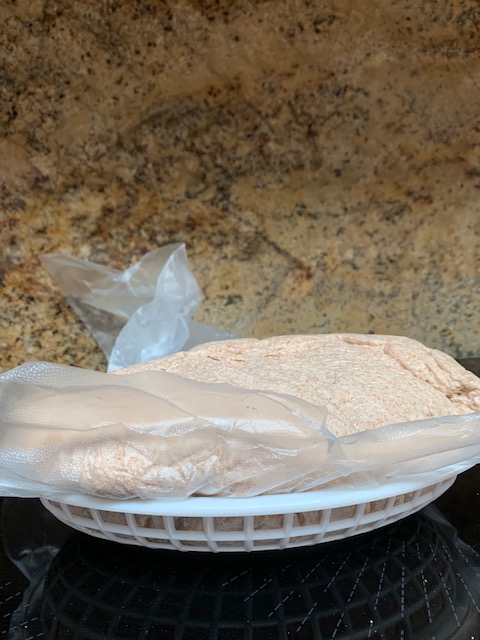 When it came time to bake, the directions called for using a Dutch oven, which I *think* I know what it is and I definitely don’t have one. Some sleuthing online turned up that I could try a cast iron skillet and ice cubes in a pan to recreate the steam of a Dutch oven. I turned into that Pete Davidson “SNL” character: “OK!”

Here goes nothing, I thought, as I dumped the dough into the skillet and let it bake.

It actually turned out. The kids even thought it tasted good. Yay me. I don’t know that I’ll do it all the time because I prefer my hobbies to be a little less needy. But if everyone else is going to branch out to new things, I think I’ll try and continue to do a little self-improvement. At the very least I’ll keep reading those word-of-the-day emails. In fact, I learned a very appropriate word for these times just the other day — potation. It means a drink or the act of drinking alcohol. Come to think of it, that’s not a bad hobby at all.

Maybe this new cup will make hydrating less boring. 🥂
Not pictured: When the ice cream spilled out of the container because I overcookied…😜
When your new @nike footwear coordinates with your flowers. Feeling very Martha Stewart right now, except she probably wouldn’t put shoes on the dining room table…
Sometimes you have to stop and buy the flowers…
Livin’ their best lives… #rescuedogsofinstagram #doublemerleaussie
Care for a blob made from a scone recipe, anyone? Anyone?
My Tweets
Loading Comments...
%d bloggers like this: