Editor’s note: Stick it out to the end for some cool book news…

“Hi there, ladies and gentlemen! Welcome to ESPN’s late-night premiere of ‘The Dog Show.’ This is not to be confused with the Westminster Kennel Club Dog Show, where dogs actually do cool tricks and look pretty. No, this is one for all you insomniacs out there. It’s the show where we watch dogs go in and out of the house all day. It’s a real barn burner! Just the slightest bit more exciting than live golf — and baseball! Let me introduce myself, I am Rex Fetch and I’ll be doing your play-by-play along with Fifi Bowkowski, who has your color commentary. Oh, yikes, two of the dogs are black Labs and the other one is white but we do not at all mean that in a racist way. So… Fifi, what are we watching today?”

“Well, Rex, right now we have Dumb Dog No. 1, who is standing right by the kitchen door. While we wait and see if she paws at it to truly indicate she wants out, here’s a little background on her. A Humane Society rescue, she was found in a box by the side of the road in Tucson, Arizona, with her brothers and sisters. She was near the top of her PetSmart puppy kindergarten class, but actually opted out of a secondary education after Dumb Dog No. 2 arrived in the house. Probably just as well because her IQ definitely plummeted after No. 2 arrived. Speaking of No. 2, who was abandoned to a local rescue group after she and her mom developed a cough, she is sitting beside the window, staring out. It’s a very cat move.”

“No, Rex, she is still crashed. No. 3 is sound asleep. She does typically get up at 4 a.m., though. A mini Aussie, she is completely white and completely deaf although every time you tell people that, they ask if she can see. Likely because she has those super light blue eyes, another trait of albinism. Wait — Rex! Can you hear that?”

“Yes! Yes, Fifi! I do! The two dogs are going INSANE. They are both now standing at the door, barking and clawing at it and it definitely seems like they want out! Yup, there they… Ow! Watch your feet! Yup, they just sprinted out and it looks like they may have stepped hard on one of the two-legged residents of the house, whose only job, it appears, is to accommodate the four-legged residents. She is rubbing her foot now. Ouch. That probably smarts because those are big dogs.”

“Well, Rex, the dogs just took off after a lizard and it looks like they may have knocked off a piece of flagstone on the retainer wall in their mad dash to get it. No sign of the lizard. Both dogs are now at the door, looking inside the house. It appears they want in. Oh wait, they’re both clawing at the metal door. Yikes. That is not a pleasant sound. Yes, both of them now — No. 1 is actually flinging herself against the screen door — appear to want in. Here comes the human. She’s opening the door and… They are in!”

“Thanks, Fif. That was really tense there for a second. It looks like No. 1 backtracked and is at the door. She is clawing at the door. Looks like she wants back out.”

“Yes, I agree. She just went out, but it does look like she’s ready to go out again.”

“Here comes the human. The human is at the door and has opened it! And, whoa! Rejected! No. 1 is looking at the human expectantly but is not going out. I repeat she is not going out, despite that wicked scratch mark she just made on the wood.”

“I don’t know what’s going on, Rex. She appears to have changed her mind.”

“Yeah, the human shut the door and walked back to the desk. Wait… wait… What’s this? No. 3 just got up out of the fireplace where she was sleeping and is now at the door. Yup. She wants out.” 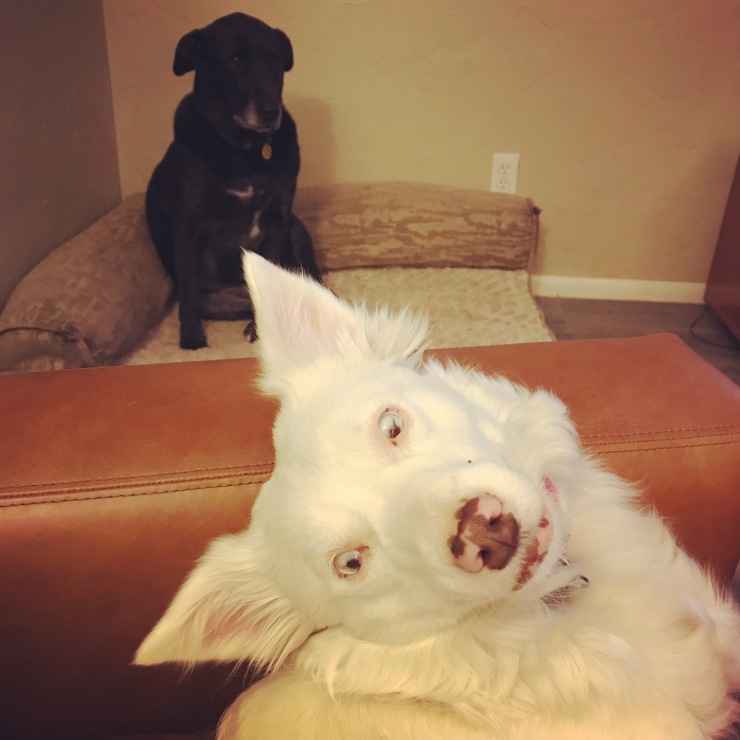 “Rex, it looks like No. 3 is chewing on something out on the frass, as we call the artificial turf. It looks to be… a rock! She has a rock she is chewing on. Interesting choice. And OK, let’s head back inside and so here we are, back by the kitchen door. Dog No. 1  again by the door, she is persistent. Wait, wait, here comes the human! She walks past! She is just walking past, ladies and gentlemen, ignoring the dog right by the door! It appears she DOES NOT believe the dog really wants to go outside.”

“Well, Fif, you can’t really blame her — the last time the dog did not go out.”

“You are right about that. Very perplexing. Oh, wait, we have some movement outside — No. 3 is now at the kitchen door. She’s up on the screen door, letting her claws drag down the length of it. Phew, that is too much like fingernails on a blackboard, if you ask me.”

“Rex, No. 3 has given up on the screen door and is now clawing at the French doors by the living room.”

“The human has walked over to the kitchen door instead and opened it up. Wait, she knows that dog can’t hear — why is she yelling? Rex, she is yelling at the deaf dog to come in the house. Deaf dog is not moving, she is just staring into the doorway. The human is now having to walk down to the other door, so No. 3 knows she can come in. She made it — No. 3 sees her and her tail is a-wagging as she trots along beside her.”

“Yes, it is. Awww. No. 3 is following the human all the way back to the computer desk and is now laying at her feet with her little white chin perched on the human’s foot. That is sweet. Well, on that note, I think we should sign off since six hours have passed.”

“Time flies when you’re letting dogs in and out, doesn’t it, Fifi? Well, I’m Rex Fetch…”

“And I’m Fifi Bowkowski. Thanks for watching! We’ll see ya again tomorrow and in the meantime, if your dogs are barking…”

“Is that our catch phrase, Rex? That seems kinda lame.”

“What do you suggest?”

“Doggone it, it’s not a cooking show, Fifi.” 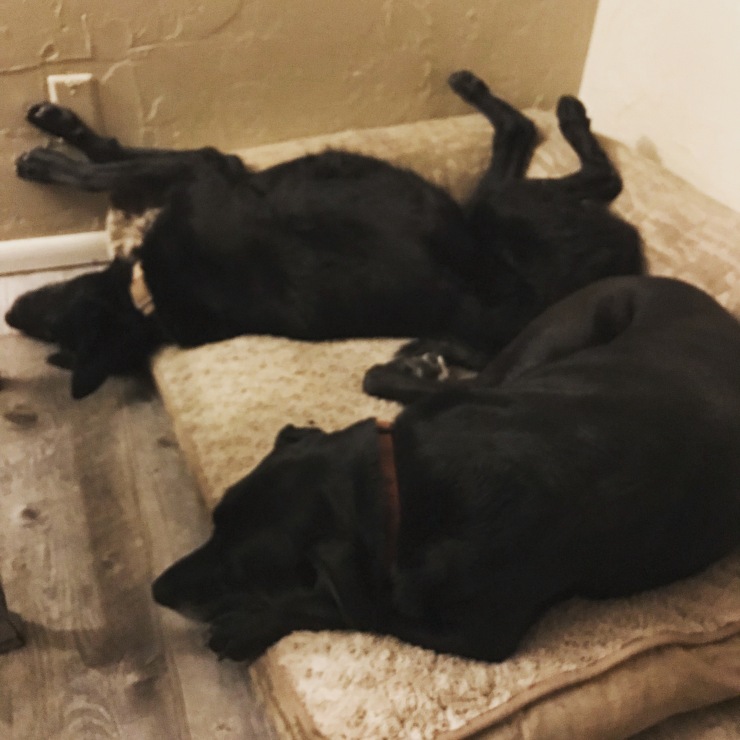 OK, as promised. Check this out:

I’m No. 521 in humor essays! That’s even better than I thought because I read that as 571 until I blew it up just now! You would never guess that I made $3.75 from Amazon sales last month, would ya?! (There’s a reason every writer except Stephen King has a day job.)

A special thanks to everyone who bought This. and then actually read it. I’m so grateful for all your kind words and support. It means a lot, so much that I’m actually at a loss for words and wish I knew how to do emojis on this program because I would throw out a ton of emojis, which would be the vibrating heart and flowers and the huggie/jazz hands smiley face… and probably the poop one, just because I like it.

The exact color of a prickly pear margarita. #desertlife
I haven’t had time to do writing that wasn’t work-related, but I made a point to blog. How could I not since I gifted myself a #ukulele lesson with an *IRL* teacher after mostly relying on @rickysomborn and @brookepalmermusic on YouTube?! If you have any song requests, you know where to find me...😜 As the cool kids say, link in bio (you have look under “latest posts”).
I call this photo* “All The Cake I’ve Eaten In The Past Week, A Retrospective.”
Whether you nurture fun-sized humans, animals, green things or everyone you meet, Happy Mother’s Day. I would like to note that this plant, whose tag says Milagro, has now managed to live for AN ENTIRE WEEK. Miracle indeed. (I’m coming for you, @theseednut.) But I’m really much better with people than plants. 💝
We went out to dinner for the first time in...a loooong time. The @commonerandco patio dining was lovely. Here’s to coming out on the other side. Cheers!🥂
Time to turn on the butt seat fans. It’s gonna be a looooong summer. #desertliving #hotstuff
My Tweets
Loading Comments...
Comment
×
%d bloggers like this: